SOONAGO is a four-piece instrumental post-rock/metal band from Bielefeld, Germany. After forming in 2014, the band has gained notoriety in the scene.

The only thing that is silent on stage with SOONAGO is the voice. Everything else creates a force of nature that involuntarily captivates the listeners. SOONAGO's musical style is characterized by a mixture of hard guitar riffs and melodic soundscapes. SOONAGO deliberately works without vocals acting as the main instrument. The songs, which mostly consist of drums, bass and guitars, invite the listeners on their own individual journey. The audience should be able to make their own associations and images in their heads and not be guided or influenced by a by a content or context. Compared to other post rock bands, SOONAGO's music is more riff-oriented, dynamic and therefore covers a range from spherical sounds to brute harshness. Most recently they have proven this live together with bands like The Hirsch Effekt (DE), Brutus (BE) or Shy Low (US).

In 2017 SOONAGO released their first album NEPHELE. Self-produced and recorded, mastered at Watt Matters Studio. In 2020 they were represented with the opener of NEPHELE "Chronos" on the sampler LOKALRUNDE of the label Kapitän Platte. The song was remastered for this by Magnus Lindberg, Cult of Luna.

In October 2021 SOONAGO was signed by the indie/post-rock vinyl label Kapitän Platte. The label, internationally known in the genre, will release the second album of the band, of course as vinyl. SOONAGO have once again placed the mastering of FATHOM in the hands of genre great Magnus Lindberg, who has refined the four songs on the album, all of which were recorded at Watt Matters Studio. For the artwork SOONAGO could win none other than the Swedish artist Staffan Larsson, who has already proven his skills several times on albums by the label colleagues of EF.The 45 minutes long LP is distributed in europe by Cargo Records, overseas FATHOM is available via A Thousand Arms.

Conceptually, FATHOM is mainly influenced by political events. During the creation of FATHOM, the band was repeatedly flooded by political messages and grievances, which is reflected in the diversity and hardness of "Apophenia", "Evac", "Besa" and "Fathom"

FATHOM was released on all major streaming platforms, as a CD (digisleeve) and also - for the first time - as a 12" clear vinyl. The first 100 vinyls included a limited hand-screenprinted poster, illustrated by Staffan Larsson. 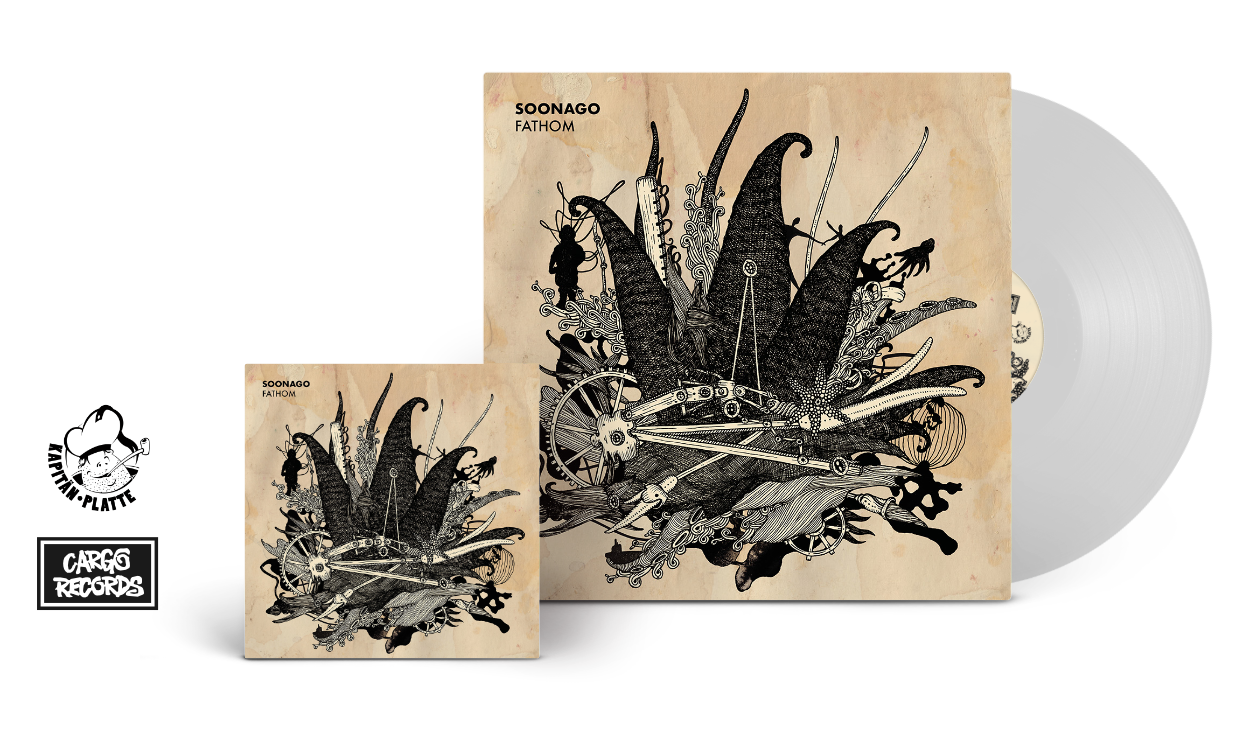 FATHOM is available at the following streaming services:

NEPHELE is available at the following streaming services: